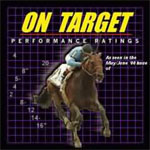 On-Target Performance Ratings provides valuable data to help you unlock more profits at the races by taking ordinary speed figures a step further. Arm yourself with superior data and unlock your full profit potential with the most accurate thoroughbred performance ratings on the planet.

For even more information, see the details tab below.